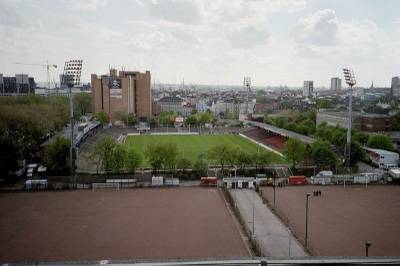 The Milerntor, Hamburg - Home of the mighty FC St Pauli. 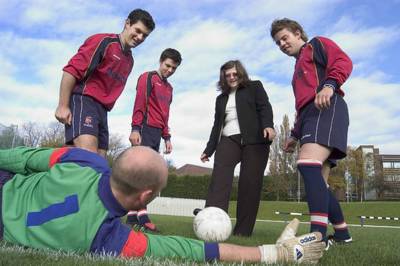 Is this the worst publicity photo ever? I think so! What is it promoting? I'm not telling you, you'll have to have a guess!

Teenage dreams so hard to beat, every time you walk down the street
I guess everyone has their own John Peel story - he's the kind of person who inspired that kind of thing. Mine is that I briefly met him in Birmingham during 2001's 'Sound City' event. Pulp and Meanwhile Back in Communist Russia were playing (both now split up) and he was compering. On my way to the venue John walked out of a car park and asked me for directions. After I told him the way he said something along the lines of 'Thank you very much young man'. Ten minutes later he was on stage introducing the first band. I seem to recall he was wearing a tweed jacket - it's funny the details you remember.

And one by Paul Morley 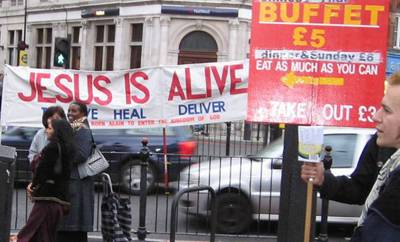 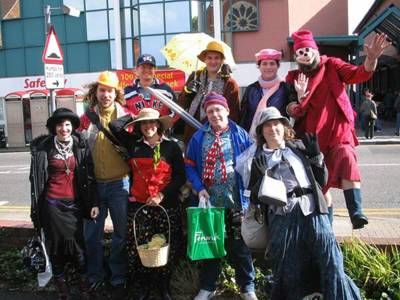 // posted by Phill @ 9:52 pm
Soup-er victory for United
So Alex Ferguson was hit with some flying soup after the Arsenal match. The Telegraph say it was tomato, the Mirror say it was Pea soup - which begs the question - Is cup a soup the secret of Arsenal's success? At half time does Arsene say "Quick Thierry, get the Kettle on, mines a Cream of Mushroom"

Also, which celebrity would you most like to throw soup at?
Personally i'd like to chuck a bowl of Minestrone at Ronan Keating's fat face, a heavy china bowl. 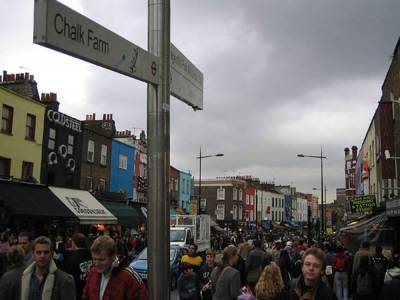 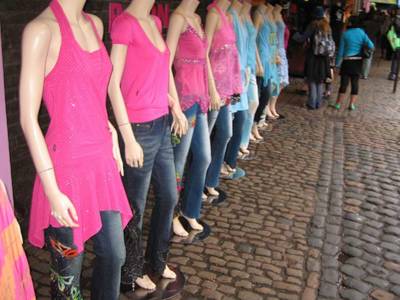 A row of mannequins 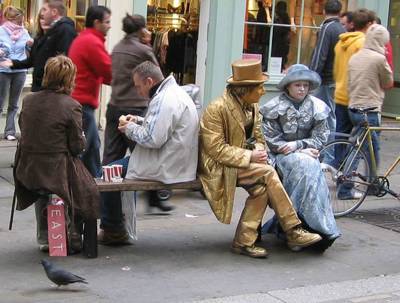 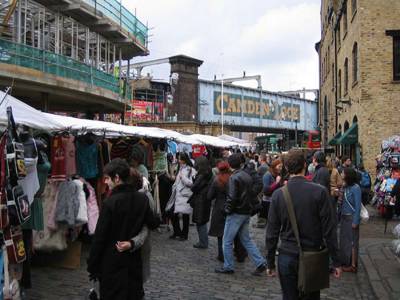 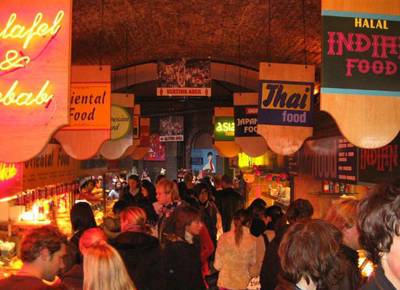 A fest of culinary delights, Camden 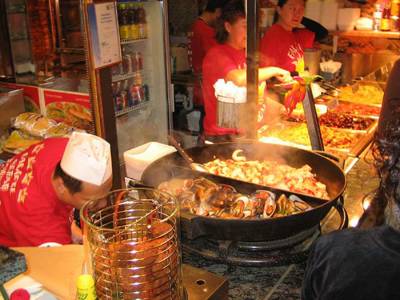 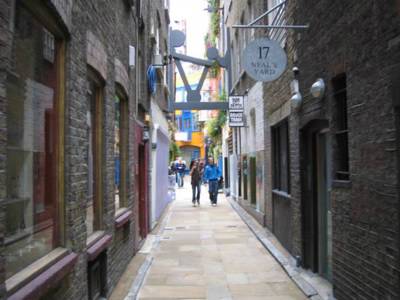 A chance encounter with a German plumber (in a goth club)
Before I begin this tale of linguistic misunderstandings, broken urinals and fake spider webs, I just want to make one thing clear...I'm not a goth! Yes ok, my girlfriend is a goth, but that doesn't make me one, I mean look at me Do I look like a goth?

Right i'm glad we've got that out of the way...Now as I was saying...I was in this goth club in Berlin the other week....

It's called the Last Cathedral and lets give those German goths credit - they really went to town on the decor. Tables shaped like coffins, candles everywhere, spiderwebs, mist that kind of thing..it's impressive stuff.

So it's about midnight and i've had a pint or two of the local ale (Warsteiner perhaps? I can't remember), so now I need to go and have a slash.

I enter the toilet and it seems in a state of construction, there's stuff all over the floor and a large bag of tools lie close by. Undeterred I prepare to take a wee and just as i'm about to take aim and fire a large man in overalls enters and starts shouting something to me in impenetrable German. Whatever he says, it's got lots of long words and contains lots of Z's. 'Ja' I mutter in reply before returning to the task in hand.

Again he repeats himself and I listen to what he says (I don't know about you, but I find it hard to piss and listen at the same time). I still don't understand so I says to him 'I'm English, I don't sprecken Ze Deutsche (or something)'.

He suddenly walks over to me at the urinal, standing next to me. He's very close. He's got a moustache I notice. I think he's going to put his arm around me. I try and remember whether this bar was in the gay section in the listings magazine.

"You want big shit?' says the German
"erm no" I reply
"You don't want ze big shit?"
"No" I say
For some reason he finds this very funny - obviously that famous German sense of humour.
He then slaps me on the back several times...really hard
"Because if you want big shit you have to go to ze little lady room"

And then I see. He's a plumber and he's fixing the toilets and not in a Village People tribute act.

"I fix ze shitter" he continues to explain, before showing me his spanner (from his toolbag.

I quickly finish up, thank him and return to my coffin table, nerves slightly frazzled but with a greater understanding of German lavatory repair.

So don't fret, get set, are you ready? You Bet!
Our Hamburg correspondent Dean 'Iron Wrists' Ellison is embarking on another World Record attempt. Undetterred by his email of rejection from Guinness after sending them his proposal to sit in a bath of cous cous, he has a new challenge - Drink a pint in each German State in 24 hours, using only local trains.

Ok, so it's not very catchy and they aren't called pints in Germany, but we can work on that when the media come calling! So can it be done? Can Dean last the pace - he's certainly got the pedigree after traveling over 100 miles on public transport with a rake, to win a bet.

Does anyone remember the gameshow You Bet? You have to say whether Dean will complete the challenge and the loser does a forfeit.

You Bet! was a classic piece of television. Originally hosted by Bruce Forsyth and then Matthew Kelly, it finally died on it's arse when Darren Day too over as host. Interestingly Jet from Gladiators was a co host for a while (Personally I preferred Vogue).

In addition to extending the TV career of an ex-gladiator, another of You Bet!'s gifts to the nation was the You Bet! rap.

Also bet you didn't know that British double gold medal winner Kelly Holmes was a Gladiators contestant - she got knocked out in the semis.

Ron but not forgotten
The world of football punditary and commentary has been a veritable wasteland since the demise of Ron 'Kilroy' Atkinson - well do not fear - as a sort of memorial to the great man Danger Here has finally catalogued the last drops of Ronglish.

And finally Danger Here dissects The future of Ronglish but neglects to mention a certain manager who is inventing is own football language.

The Young Pretender
QPR manager Ian Holloway is becoming known for his 'Ollyisms' or The Art of the ill-judged metaphor in pre and post match interviews. Here are a few examples:

On a poor performance during a pre-season friendly
"When you play with wingers you look a bit like a taxi with both doors open, anyone can get in or out"

On QPR's bad start to the season
"In football, there is no definite lifespan or time span for a manager. After a while you start smelling of fish. The other week it looked like I was stinking of Halibut!"

On big man Georges Santos
"He's a big lad, he can clean out your guttering without standing on a ladder"

On easing Danny Shittu back from injury
"The games are coming thick and fast for him. I've told him to go down to Iceland and ask if he can sit in one of their freezers."

After the "ugly" win against Chesterfield
"To put it in gentleman's terms if you've been out for a night and you're looking for a young lady and you pull one, some weeks they're good looking and some weeks they're not the best. Our performance today would have been not the best looking bird but at least we got her in the taxi. She weren't the best looking lady we ended up taking home but she was very pleasant and very nice, so thanks very much lets have a coffee"

When asked to predict a result
"I am a football manager I cant see into the future. Last year I thought I was going to Cornwall on my holidays but I ended up going to Lyme Regis"

On the abuse Gino Padula gets from away fans
"Everyone calls him a gypsy but I can assure you he doesn't live in a caravan. He has a house with foundations"

On strikers
"You can say that strikers are very much like postmen: they have to get in and out as quick as they can before the dog starts to have a go."

On The Clubs financial position
'It's like the film Men in Black. I walk around in a black suit, white shirt and black tie where I've had to flash my white light every now and again to erase some memories, but I feel we've got hold of the galaxy now......it's in our hands.''

On playing defensive players in midfield
"It's all very well having a great pianist playing but it's no good if you haven't got anyone to get the piano on the stage in the first place, otherwise the pianist would be standing there with no bloody piano to play!"

On former Blues striker Paul Furlong
"I liken Paul to a magnificent bottle of wine. You take your time and you leave it in the cellar until you want to pluck it out and it just gets better and better."

Many more 'Ollyisms' can be found here

Westlife *SCREAM*
So yesterday I met Westlife, those four lovable Oirish fellas. I shook each of them by the hand and took some photos of them. Very polite and well groomed they were...lovely lads, I haven't got a bad word to say about them apart from perhaps mentioning their ENTIRE CAREER! No, but seriously, lovely lads they are...lovely lads....

Ciarán said I should have bumped them off, but there were far too may witnesses and besides...they're 'lovely lads'.... 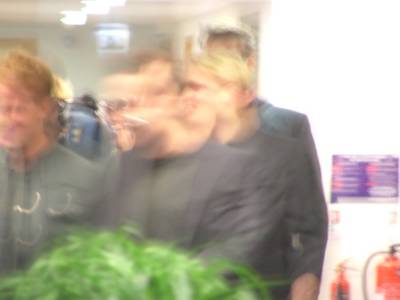 A spooky picture of Westlife that I took today when I met them....lovely lads....sigh....

Pramtastic!
Check out my interview with Pram.

If you haven't heard of them then go to the Domino Records website to have a listen to a few of their tracks. They're very cool indeed and i'm just off to see them play tonight at the Custard Factory in Birmingham or L'usine de Creme Anglaise, as I believe it might be known over the other side of the channel. 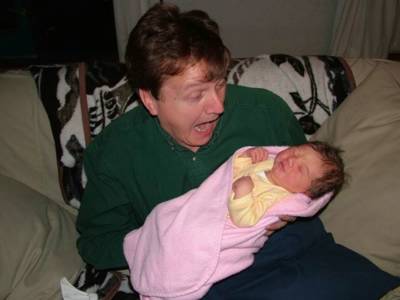 Here's my new cousin Francine Emilia Huxley, with my Uncle Paul - born on Monday in Amsterdam!

Illness
So my sister has Chickenpox and i'm feeling a bit ropey myself...could I be going down with it too? Neither of us have had it before, which at the ages of 20 and 24 is quite impressive really I think. No spots as yet but i'm on the lookout for them. Has everyone else had Chickenpox?
What else has happened in the past week? Well I went on a charity shop crawl and met Terry Wogan...but more on those another time. *sniffle*