Fincho reviews Queen Adreena (whilst I take photos)
The atmosphere at Rock City is one of anticipation as Queen Adreena prepare to air new songs from their forthcoming album ‘Butcher and the Butterfly’. 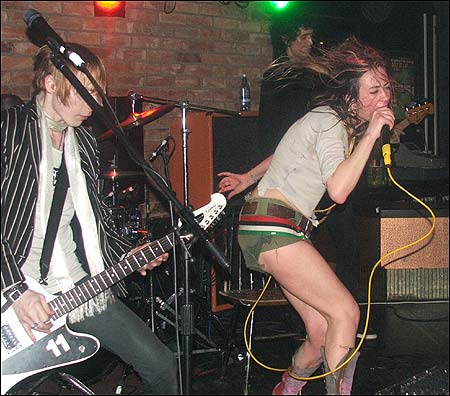 The band have been out of the limelight since the release of their 2002 album ‘Drink Me’. Now two and a half years later, which Katie Jane has stated has been a fairly traumatic time for her, we wait with baited breath.

First up are three-piece Three Children Of Fortune from Kent. Their first song starts quietly and then builds to a frenzy of distortion in the chorus. This is a formula which they seem to use a lot throughout their set, but the contrast in dynamics does work and helps to keep the songs fairly unpredictable.

The stand out tracks are ‘Flesh and Bone’ which has quiet moments that display singer and guitarist Tommy’s vocal range, their first single ‘Ghost Clothes’ which is quite Idlewildesque, and their new single S.F.

The three-piece’s blend of emo and post-punk is well received, and Tommy’s blend of shouted, screamed, and sung vocals keep the audience guessing what is going to happen next. 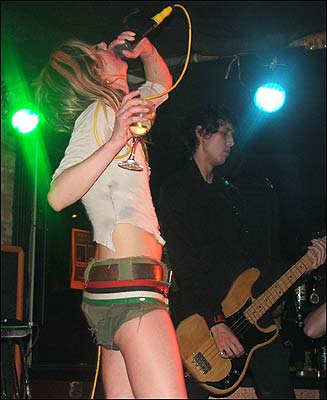 Now the moment we’ve all been waiting for. Queen Adreena take to the stage with a blinding rendition of ‘Kitty Collar Tight’ from their last album ‘Drink Me’,

Katie Jane’s voice is amazing. It’s surprising how such a loud noise can come from such a small person, but she has obviously mastered both projecting herself and her stage act throughout the years.

She is wearing what appears to be a slightly Lara Croft inspired outfit, hot pants and a ragged top and is as unpredictable on stage as always.

Katie and guitarist Crispin Gray regularly try to push each other over during the set, Katie hitting him with her microphone, and Crispin dragging her to the ground on several occasions. At times it is rather like a rock 'n' roll pantomime but that’s what Queen Adreena do best.

It’s amazing how both musicians keep such a degree of professionalism throughout the show whilst performing such crazy on-stage antics. Never once does Katie’s voice or Crispin's rhythmic guitar playing falter. It’s all absolutely spot on. 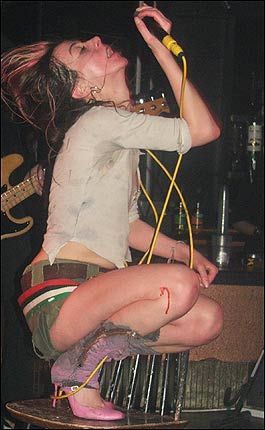 We are treated to a mixture of old classics such as ‘Cold Fish’ from their 2000 album ‘Taxidermy’ and two fantastic versions of the anthemic ‘Pretty Like Drugs’ and the divine ‘Razorblade Sky’.

The other half of the set is new songs and they sound simply magnificent. Katie can use her voice in so many different ways, whether singing softly or in sudden outbursts of screeching rage and shouting.

The new songs appear to cover such taboo subjects such as murder in the new single FM Doll, and voyeurism.

The evening’s events are wound up with old favourite ‘Pretty Polly’ which the crowd is delighted to hear as Katie Jane rocks in an unsettling manner.

Then she disappears from the stage just as mysteriously as she arrived, leaving the audience feeling like they have just witnessed some bizarre carnivelseque ritual, but also feeling immensely satisfied. Pure magic.

Read the review on the BBC Nottingham site and see my photos.