Police are searching for a man with a biro beard 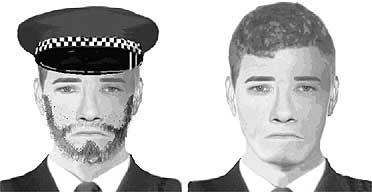 As much as I am loath to criticise our fine boys in blue, the photofits of the criminals in the recent Kent heist left a lot to be desired.

One can only suspect that the police were reaching the deadline for the press conference and the photofit wasn't yet completed:

"We need the guy with the beard" barks the guy in charge of the investigation.

"But it will take two hours for me to render an accurate beard weave using our sophisticated computer technology" says his bespectacled colleague from IT Squad.

The Officer in charge turns to address the rest of the room: "We've got five minutes, any ideas for this photofit?"

Silence... a tumbleweed blows by, an amusing sceensaver kicks in on a junior officer's computer screen, he quickly moves his mouse to stop it.

A detective sits in the corner clicking his ballpoint pen, doing the crossword in the Sun. He flicks to page three where he has drawn a comedy Hitler moustache on the scantily clad girl. "Give that picture 'ere guvna" he says in a cockney accent, because all detectives talk in a cockney accent, just like in The Sweeney. And in two minutes he draws on the required facial hair before they go out to face the media and issue a description.

Unless of course the robber did actually have a beard drawn on with biro. Maybe the fancy dress shops were closed that morning and he fashioned a rudimentary disguise using a Bic he had in his back pocket.

In Crimewatch in a few weeks Nick Ross will be saying:

"Police are advising that if you see a man with a beard drawn on in biro, do not approach him. He may be armed, dangerous and could get a nasty inkstain on your clothes should you try to apprehend him."